Poor adolescents. I was one myself once, and it was not a pretty sight. My own kids aren't too bad... yet... usually... But even they have been known to reach astounding heights of toy-throwing and brother-cuffing to rival the worst toddler. It can be baffling to parents when their child goes through this after the sweet wonder years of primary school, but new advances in neuroscience are giving us a peek into the adolescent brain, and may explain our teenagers’ apparent unreasonableness and babyish behaviour.


Babies' brains undergo a critical few years of development. Many neuron pathways become fixed before age seven and this is what makes us, as parents, so conscious of what our kids are exposed to during that important developmental time. We have known for generations that the early years have a profound and permanent impact on our children’s nervous system and well-being.

But new studies show that far from being set in stone, as it were, during adolescence the brain is still malleable and even undergoes some intense reorganization. And this reorganization means that teens' needs may occasionally be childish. If your toddler had an afternoon meltdown, you would immediately think ‘Tired? Hungry? Overwhelmed?’ and you would give them a snack and a quiet moment. Perhaps a cuddle and a story. You would make sure they had an early night. We seldom react to teenage stomping and door-slamming  in this way, do we? We expect them to calm down, grow up, be sensible, tell us what on Earth is wrong, for heaven’s sake. We get angry and shout “You are acting like a toddler!”

The adolescent years are so similar to babyhood: Ridiculous growth spurts, where his arm is suddenly an inch longer and he knocks things over. Discovering new things about her own body. Being absolutely starving at inconvenient moments. Having a meltdown over a sock. The need for more hours of sleep than he would like. Discovering a self. Being afraid of the unknown. Being deeply affected by a TV show. Bursting into tears and insisting she can do it herself... Parents can actually help a teen to grow to adulthood by allowing them to regress at moments like these. If your teen will still accept a hug and a cup of cocoa and a quiet chat about something very simple, "Have you noticed how that tree is losing its leaves already? We should get some bird seed this week," then that's all you have to do.

One of the wonderful things about this revisiting of babyhood is that the hormonal soup of teenage brain can bring up, repair and discard useless or faulty issues. If your teen repeatedly insists that you are not listening, for example, then in their childlike brain they believe this to be true. And the best way to 'fix' this is to listen. And listen. When they walk out, follow. When they shut the door, post a note under it which says, "I love you, I want to listen to you." When they shut up to PROVE that you are not listening, as in "I am not talking, therefore you are not listening," listen to their silence. It honestly doesn't matter what exactly they are talking about, the point is they believe you don't listen. You have a valuable opportunity to fix it. Teens will test theories again and again, just like toddlers: Testing the rules, testing the limits of our patience. It's up to us to be consistent and caring, just as if they were toddlers. "We STILL don't chew with our mouth open at this table, thank you." 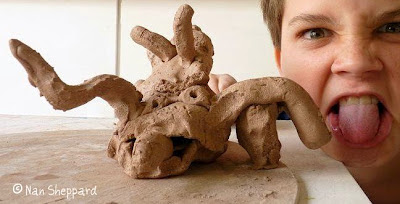 In some ancient societies, adolescents were shut up in a cave or hut until they learned to act like a grownup, and had a grand re-birthing ceremony where they were welcomed back into society. I know that many of us feel those parents may have been on to something. It's hard not to take it personally when your teenager's life is COMPLETELY RUINED FOREVER and it's ALL YOUR FAULT. Thinking in terms of their childish needs can make tantrums easier to bear. So, the next time your teen behaves like a baby, don't try to reason with them. Take a deep breath and tell yourself that it's just Toddler Brain.

Anonymous said…
Oh just brilliant.. So true!! Just last week I had a chat with P about the fact that the young man doesn't think we're listening to him - so we're listening much more and he's much happier
03/10/2011, 19:43

Anonymous said…
Coincidentally I'm reading the latest National Geographic which has a feature story on teen brains--I need to prepare myself!!!
04/10/2011, 17:18

Debs said…
Your article was brilliant! I feel like a horrible parent, is it to late to help my 18 year old? She complained, about me never listening. We would end up having a huge fight,she would then scream about how much she hated me and stomp off. Now she barely speaks to me. How do I fix this? Please help me. Do the same things you said in your article apply or is there something else I should do?
19/11/2011, 12:19

Nan Sheppard said…
Don't Panic!! All our lives, we are changing the way our minds work - which is why therapists make so much money! And kids will always bounce their personalities off their parents. If you can become a more knowledgeable parent at any age, it will benefit your child, at any age.
26/11/2011, 20:08

Unknown said…
The teenager in my house just turned 17, but still acts like a toddler. As helpful as this is, it just wouldn't work. He doesn't listen, doesn't like being touched, you can't do anything with him without him acting up, unless it's getting him something or doing something for him, but even so, most of the time after that he still acts up.
27/10/2015, 03:03

Nan Sheppard said…
I’m not a therapist, so I couldn’t say. When you’re a teenager your brain can heal a lot of old stuff though, so surrounding yourself with people who like and love you, and helpful professionals like therapists, is a really good thing. We all have childhood trauma, and it’s so good to figure it all out so we can move on and have an amazing life. It’s hard work, but it’s so worth it! Good luck with your healing journey :) x
21/12/2019, 14:29