There are chickens in our trees too. My parents have kept chickens for years, and these wonders of ecology and economy provide us with delicious eggs while keeping the garden fertilized with their amazing poop and preventing insect overpopulation. I have seen chickens attack and eat large snakes and eight-inch centipedes. They are a Good Thing To Have Around.

They are also a source of great annoyance. Those tropical chickens do not cluck contentedly like good chickens should. They start to nag at about four in the morning, working themselves up to a full-blown cussing match like a Curepe Housewife and her neighbours by dawn. Somebody did something, and there will be no peace until the whole neighbourhood is coming out to whine and screech. A whole harem roosts under our house, so it is not at all entertaining.

The masters of the various harems tend to crow at intervals all night, but you get used to that. One will wake up and decide that a good two a.m. COCKADOODLE is in order. He wakes his neighbours, who cockadoodle back. They generally shut up after a few goes, and we can all get back to sleep.

But the hens? You can pelt them with rocks, pour water out the widow upon them, and shout obscenities in their general direction... And you only end up sounding like one of the harem. They never shut up. They just hurl insults right back, discussing your uselessness among themselves.

"SHE? She worse dan Henny Penny! She never lay no blasted egg!"

"What you know about my eggs, yuh little shithong? Take care yuh doh get a pot!"

"Yuh hear dat? She could talk to me so?"

The ONLY redeeming feature of the hens, apart from the delicious free-range eggs they lay, is when they disappear for a few weeks. "Where is Chips?" we wonder. "Where is Pippy? Have they been eaten by a Tayra?" 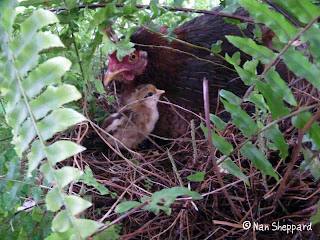 Suddenly, they appear from nowhere, each with fifteen tiny balls of fuzz in yellows, browns, black stripes, and speckles. Our hens are mongrels, and wonderful mothers to watch. They stop cussing, (Not in front of the children, now!) and spend their days apart from the harem, talking softly to their babies. Teaching them to scratch with exaggerated movements, clucking excitedly when they uncover a nice worm, digging into the compost pile for sweet goodies.

The roosters, too, look for goodies and call babies over for a treat. They look so proud and protective; nothing like their normal serial-rapist selves, when little chicks are around. (Then, a hen without chicks will happen by and he will forget his parenting mission, chase her down, grab her by the scruff of her neck, and have his way with her. She will complain loudly, and stagger off afterwards all dishevelled. She will go start an argument with someone to feel better about it.) (Do I really want my sons exposed to this??? Geez!)

Mama hens fluff themselves out in the dust when their babies get tired from walking on those short legs, and everyone cuddles up in their breast feathers for a nap. They are watchful: So is the hawk, he waits for a chick to wander away and swoops to scoop up a delicate snack. When threatened by a predator or curious child, the hens puff themselves up and herd their babies behind them. Don't push your luck, kid, or you will end up pecked!

Not all hens are natural, wonderful mothers: Once, we had a black hen who hatched out two babies. The first night they were born, she went to roost in a tree, while they cried in the grass below. She was clearly annoyed, speaking harshly to them, hopping down, going back up, and eventually falling asleep in the tree. In the morning the babies were gone, of course. They had made a delicious meal for a passing carnivore.

The hen was upset, and acted very strangely. She began sitting in a cardboard box WITH another hen, an amazing mom named Henny Penny or "HePenny". Hepenny was not impressed, but moved over. When Hepenny's babies were born, Blackie followed them around and mimicked every move Hepenny made. Hepenny would not let her touch the babies, but she was very close. She scratched, she clucked, and at night, she snuggled down on the unsafe, unfamilliar ground, watchful all night. The babies, and their mother, seemed to accept her as a sort of "Auntie". The babies grew up and moved on, and Blackie went on to have a few chicks of her own, which she hatched, protected and taught all by herself. She scratched, she clucked, and she slept on the ground for many months until they were able to fly up into a bush with her. She never took her eyes off them for a moment. She was a happy chicken. She had learned how to mother.

haha..loved that story Nan..especially since I have first hand experience of those damn 'fishmarket women' chickens at 4 in de mornin' for 3 days straight! One more day and everyone would have ended up in de curry pot! Looking forward to seeing you and the whole Kentucky Fried Chicken crew later...BugAAAAUUWWWKKKK!!! " We go give dem some competition!"

Wonderful story
You should consider publishing a book of short stories, illustrated of course

Your chicken story was wicked good!
I'm always excited to see your blog come up in my reader.

Wow. I've learned a lot here--the mystery of chickens explained and now I'm not so sure I want to pursue that line anymore (the noise factor freaks me out--I had a totally different image of owning chickens. it mostly involved the fresh eggs.)

I remember Henny Penny... damn bird chased me all over your place cus i walked (unknowingly) too close to her babies. She din peck me though (whew).

I used to love to hear the roosters-and-hens cacophony when i was a child staying with family down south. I think that if i had to deal with that now, we would be eating fresh chickens for lunch very regularly.

Yuh make mih buss out laughing with the hen cussing!

Such a great story, Nan. Fits right in with my week.

Cute story!
popped in via fivestarfriday.com