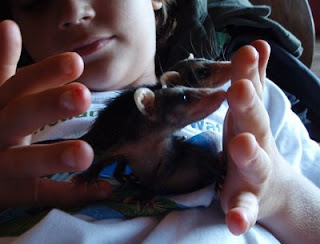 Ooooh, I am really catching up here... I know you have all been dying to know what happened to the manicous. Even though mostly, you haven't asked, I know that every day you wake up and wonder "Will this be the day when Nan writes a new Manicou Post?"

Well, wonder no more! Take a look at those cute babies!

I know, they look exactly like Heckle and Jeckyll. That there is Boudicca (Buddy) and Chicken Soup (Chicken), just before we went down to Mayaro the last week of the Holidays. We left them with Mum and Dad, and stopped having much physical contact with them. Obviously, we didn't want them to grow up with no fear of humans, so once they were old enough to eat whatever was dropped in their cage we stopped playing with them.

They grew FAST and soon grew into their true possom-ness. Ugly, Scraggly-looking and sort of Vicious. At least, they never bit anyone but they looked like they might. They hissed and chattered threateningly when startled. They don't seem to have very good eyesight, but I suppose that's normal for nocturnal animals. Dad built a really big cage for them once they were old enough, and it was wedged in a mango tree far from our houses.

They seemed happy there and became truly nocturnal, spending their days sleeping in a terracotta pot and their nights pacing. Then one night, they escaped. They returned several times to eat in their open cage, and Mum made sure to keep putting worms and fruit in there for them.

As far as we know, they are wild, happy and eating all of the worms and chicken eggs they can find. Which is probably why I keep having to buy "Grocery Eggs"! We are pretty proud of ourselves for raising them successfully. Possums are notoriously difficult to keep alive, and the five babies had spent enough time out in the rain to become sick, dehydrated, and wormy. Keeping two alive was quite an accomplishment.

We found out that manicous are lactose intolerant, and when switched to soy based baby formula they thrived better than on milk-based formula. I added a speck (a very scientific measurement, I know) of antibiotic powder from an amoxycillin capsule to the early feeds, to deal with infections. When they are tiny, their mommies lick their bottoms to help them poop. If you would rather not do this, you need to wipe them with a piece of damp cotton at each feed. Feed every two hours during the day, and as often as you can stand it during the night. (Many thanks to Sean and Sharon for their exhaustive web searches to find all of this out!)

When they are older they prefer to poop in water, so they need two bowls full. One for drinking and one for pooping. The babies fed much better from a glass dropper than by any other method, even those professional-looking "baby animal feeders". Their first solid foods were banana and avocado, and they ate hard boiled eggs cut in half, passion fruit, mangoes and worms. OH HOW THEY LOVED WORMS! They pounced on those worms and tore them apart.

What did I learn from my Manicou Experience? Most importantly, I learned that I can pick large worms up with my bare fingers. Never had I done this before. I can grip them tightly with my fingernails so they don't escape, even when they wriggle and wind their slimy selves around my fingers. I can go dashing after an escapee, shouting "OOOH, A YUMMY ONE! GET IT!" I can pounce on worms with never before seen enthusiasm because MAH BABIES! THEY GOTTA EAT WORMS! And dirt and bits of worm under my fingernails hardly grossed me out at all. I feel this is a sign of great character or something. Others may feel differently. I am sure, though, that it's got to count for something. Can I put "Worm Catcher" on my Resume?
Posted by Nan Sheppard at 23:50

Hey, at least I know waht to do now if I ever have random opposum babies......They were kind of cute when they were young.

Something stinky, ugly and hisses?
Sounds like cuddly love.

They are kind of cute--Heckle and Jekyl. That works:)

I know so much now if I ever stumble across baby possums--and I know I shall NOT lick poopy butts, but stock up on cotton wipes instead.

I didn't even know what a manicou was until right now. You learn something new everyday.
I was gone, but now I'm back and glad to be reading your blog again, Nan!

Yay for the Chicken and Buddy! Not so yay for the worms. But YAY for you and your non-butt-licking poop technique :)

So glad that Boudicca survived. A toughie. And thank you for keeping the two of them going. I'm sure there were times when it would have been easier to just give up. Well done you and your children.

As a lad, when fishing, our bait was always nightcrawlers - big, fat, juicy worms.

Nan,
You are the best manicou mama!! Right now you are the stuff of legend in the manicou world.
You are probably the only person to know so much about possum babas.
The boy's blog is amazing - future National Geographic material definitely!!
I think my feed is working again.
Keep good,
sharoxx

Hi there! Remember me from sailing camp? The girls (Esme and Clea) were asking about the Manicou babies the other day so it was good to read your news. I love reading your blog and I promise to check in now and again. I am blogging a little less since i have back at work and trying to get 16 year olds interested in Macbeth! But I will get typing again soon.
love samantha