Tragedy and Hilarity in Mayaro 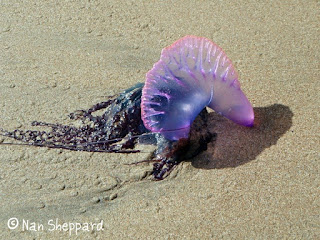 Portuguese man-o'-war jellyfish are nasty things. Their sting is horribly painful and scary. We have had many minor stings in Mayaro, as the tentacles break off in the surf and even a "dead" piece of tentacle, even hidden in the wet sand, can cause painful burning and itching. In the sea, the tentacles trail up to 30 feet, searching for prey, and they catch and paralyse fish and pull them in. And digest them.

Poor boyo was out surfing, and was snagged. A man-o'-war got its nasty tentacles around his legs and began pulling itself towards him, and I won't forget his screams in a hurry: First "Man-o-war! Man-o-war!" to get other bathers out of the sea, and then "HELP! HELP HELP!" when the pain started to set in. He was desperate. We poured vinegar (neutralizes the alkali sting) down his legs while I grabbed handfuls of sand and scraped the clinging tentacles off ("Burning! It BURNS!") and picked them off with my fingernails. From ankles to thighs he was stung. We got him inside, gave him a panadol and a piriton tablet, rubbed anthisan cream on him, and then I sat with him while he cried and begged for the pain to stop. One minute he was hot, next he was wrapping himself in a blanket. He wanted ice to cool the burning, but it hurt to touch his legs. He shook and trembled, gritted his teeth, and cried. 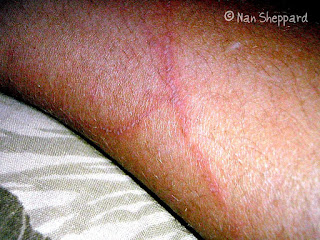 There was really nothing that could be done but wait it out, and that sucked. After half an hour or so, he could get up and stagger about. He improved quickly, but felt a little nauseous for the rest of the day and tender. He'll have some cool scars to show off for a while.

That was not fun.

We had seen a few of the nasty jellyfish washed up on the beach, and were "being careful" as usual. Watching for purple sails in the sea and cautioning the kids. After our experience, no-one wanted to go near the water. The next morning, the beach was COVERED with jellyfish! Millions of them! And then just like that, they vanished. Where do they go?

The wildlife was out in full force, in fact. A huge leatherback turtle came up on to the beach, in full daylight, to lay her eggs. We kept far away so as not to frighten her but others were not so considerate. When someone tried to explain to them that they should not go right up to the tired mama with their flash photography, they yelled that the beach was public and frightened the leatherback away. She would have come back later in the night, but the trip up the beach and back must have exhausted her enough. I hope she made it okay. There are few safe beaches for leatherbacks to nest now. They need peace and quiet, and darkness. Lights confuse their sense of direction and makes it difficult for hatchlings to find their way to the sea. 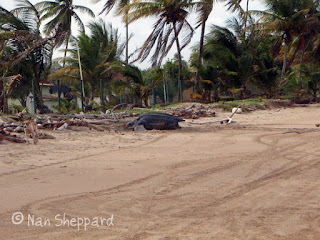 I am glad to report that out of the hundred or so people on the beach, only one was an asshole. But it only took the one. I bet they got some really good pictures, closeups. May the fleas from a million camels infest their pubic hairs.

Apart from the wildlife from the sea, there was our usual list of suspects. Four Mamas and eleven kids... Not enough beds, and all full of sand and children, but who needs sleep anyway? We missed you Shar! Don't worry, I've saved some fleas for you.... You know what to do with them!

We did our usual wild 'n' crazy stuff, us mommies. We ignored nine little boys and two teenage girls who had an amazing time without us, and drank an obscene amount of tea. We stayed up too late, got up too early, and laughed till our faces ached. We helped Suze correct papers. We danced around the kitchen and sang into the spatula, serenading our children. (They are used to us.) I swore a solemn oath I would not post certain pictures on facebook, so I'll have to put 'em here instead: Kelli, how DO you manage to glow with seductive mystique while wearing a face mask? 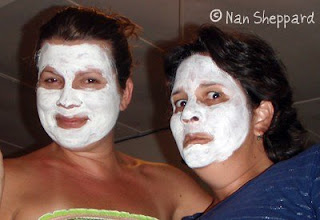 Girlfriends. After a week with them, all problems are solved. Good food has been eaten. Anything can be done. The soul is nourished. Detractors have been psycho-analyzed and forgiven. Happiness and confidence reign. My friends, you are amazing. I love you.


(Lou, if you click on the "Mayaro" label, there's lots more Mayaro pictures and stories. Next time you visit, be sure to save a few days for this beautiful place.)
beauty and the droop bush adventures girlfriends mayaro

Anonymous said…
First of all, I'm so offended at that jerk who scared off the mama turtle! How clueless can one be?

Second, poor poor Chas. Elliot got one dead PMOW tentacle wrapped round his arm once our first year in Mauritania, and it was bad enough but nothing like Chas. Elliot still, 8 years later, has faint scars. We didn't have vinegar with us, and Donn tried to get him to pee on it. He said, "There are only a few situations in life where peeing on yourself actually helps, but this is one of them!"
19/04/2009, 23:04

Nan Sheppard said…
I have heard that pee works, and vinegar was an immediate, though slight and temporary, relief. Poor Elliot! Maybe his dad could have peed on him?!

nikki said…
Wow! Holy crap, sorry about the jellyfish sting. Being in Michigan, we only have fresh water. Man, how I would like to give a piece of my mind to the person who scared off the turtle.
20/04/2009, 19:50