The intrepid explorers show off their muscles! The grownup in the shot is Dave, a researcher. He likes to wrestle and count bugs. The boys are deeply impressed. I think that Kamala has the BEST muscle pose of all! Sam has the backpack, which is almost waterproof and floats beautifully. We use it for floating downriver! 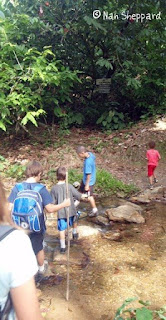 We crossed the river and walked in among the cocoa trees and anthuriums.We didn't eat the cocoa pods, as one of Brasso Seco's best products is cocoa for drinking. 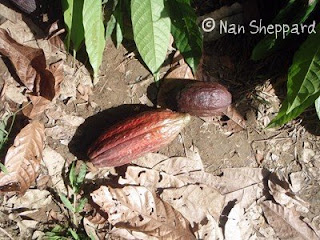 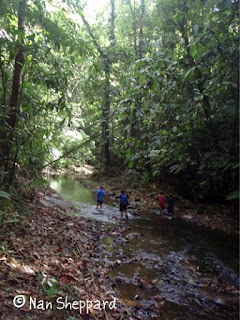 We met the Marianne River after a short hike through the cocoa, and headed downstream. Kelly knew about a waterfall further down, but we didn't know just how difficult it would be to get there. It turned out impossible for Max and Khalil, so Chas and Sam and I planned to return the next day. 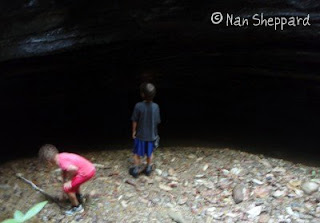 That didn't stop us from having a marvellous time anyway! Max never goes anywhere without his "Survival Pouch" that Santa brought for him. It's got everything a small adventurer needs: Excellent knife, torch... the big boys scoffed and said "A TORCH? It's daytime! And we'll be in the river! It will be destroyed! Boy Max, are you going to learn a LESSON. And how much did that torch cost, huh? It's not waterproof y'know. You'll only lose it or drop it or something."
Max wisely (stubbornly)ignored them. And wouldn't you know it, we found CAVES! Suddenly, everyone wanted to borrow the torch, which did indeed fall into the river and turned out to be reasonably floaty AND quite waterproof. We opened it up later on an dried it out, and it works still. Max was magnanimous and knowing throughout. 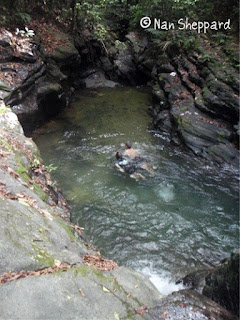 After a few exciting climbs down small falls, we reached the point of no return for the small boys. Chas and Sam scouted ahead to see what lay beyond, and had an adventure getting back! The current was strong, and the falls slippery with leeches. We had fun picking them off each other, and put a few into a snack packet for later examination. 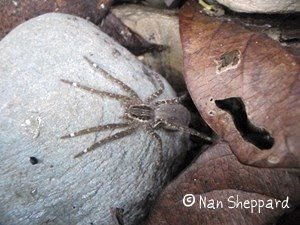 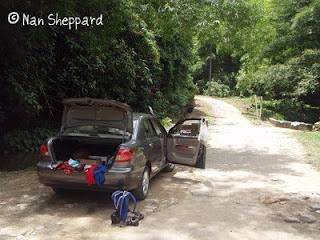 So eventually, we meandered back to the car, discussing what we would need for our serious downriver trek. Our almost-waterproof bag was full of water and weighed as much as a BUCKET of water, and the first aid kit was completely soaked, along with everything else. For the next day's adventure, we used a real waterproof pack inside of our almost waterproof one, and it was much better. We spread everything out to dry a bit before heading back to Kelly's house for further discussions and to look at our leeches under a microscope. 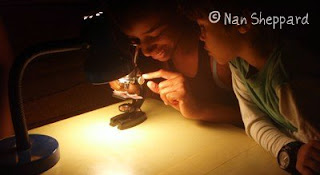 The rest of the evening was spent recuperating, eating, planning, reading, and in Kamala's absolute fascination with Chas' spiky hairstyle. Brasso Seco, and especially Kelly and Carl's house, is one of my favorite places in the world. See you again soon, guys, and thank you so much! We love you! 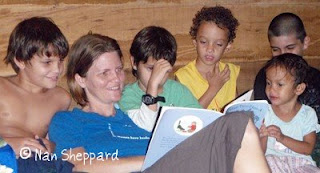 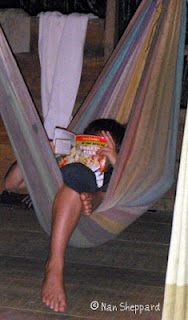