What's Up In Homeschooling 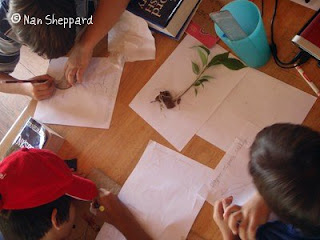 The boys are doing math at the moment. And mostly complaining: "I KNOW how to multiply fractions!!" They have to do some math every day, otherwise I worry that they will have forgotten everything by next term. Apart from math revision, we are having a blast. We are heavy on the sciences: The solar system, matter, atoms, rocks, plants, . It all ties in, somehow. We are asking many questions, and most are being answered. We are doing TONS of reading and plenty of research on the Internet. The boys say that they have learned more this term than ever before. 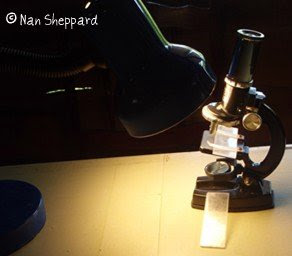 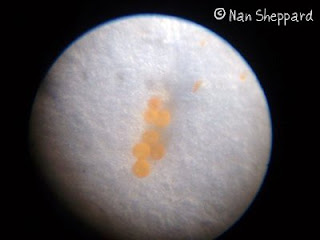 One thing that has been exciting all three of the boys is Photography. They are documenting their days, and even taking photos through the microscope - The funny-looking round photo there is "Pollen"! The camera has a "macro" function and Chas' interest in tiny science is evident. 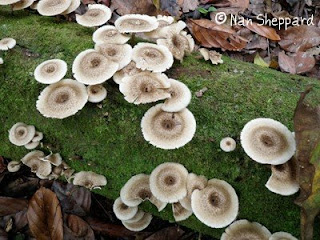 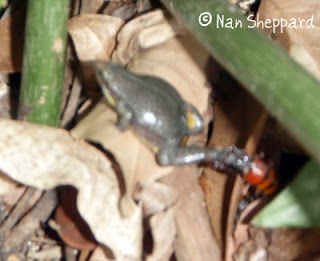 Above is a picture of a small frog being attacked by a centipede, which Chas took. VERY exciting! Chas said that the frog escaped the attack, and went to higher ground, but the venom killed it anyway. The centipede followed, and got to the frog after it had died. We live in a great place for natural science!

In photography, they have also been taking videos on the camera, and then watching them in reverse. Or sloooow. Writing short scenes and videotaping themselves. Drawing little flip-animation scenes on scratch pads and playing them back. Then videoing them. Trying all of the settings on the amazing Olympus Stylus 790 SW, Shock+Waterproof+Boyproof. Best camera ever. Playing with different photoshop programs.

Of course, music is happening.

The boys have been honing their kitchen skills too: Cooking, clearing up, washing dishes, and more cooking. And eating. Eating while stirring, eating while grating, eating while chopping. Max has been reading aloud every day, and I am proud to say that his reading skills have really improved A LOT. We have almost finished his first chapter book, "Treasure Island", which he has read with FEELING and a real pirate accent whenever the pirates talk: ' "Aye, he's dead," agreed one of the pirates. "But he died bad. If ever a spirit walked, it would be Flint!" ' Max reads this in a gravelly accent of doom, and you KNOW that the pirates are in for it. I am pretty impressed. A couple of months ago, I would have said that Max was struggling. He still stumbles occasionally, but his confidence is soaring and he reads smoothly and with understanding.

Chas and Sam are bookworms, so they are reading a lot too. Maybe soon I can call Max a bookworm too! Can you tell that reading is a big huge deal for me? We have been looking EVERYTHING up in the dictionary, and have done some research into Word Origins which was really interesting. Now, when we look stuff up, we check the word's origin too. 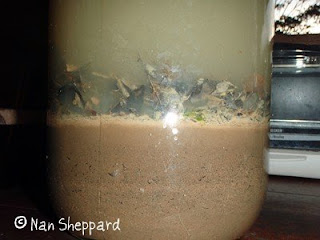 Dirt in its myriad wonderful forms has absorbed us for much of this term. We collected it in a huge jar with rocks, sticks and leaves and water, and stirred it vigorously. We discussed what would happen if a huge flood washed over our hill and everything collected in the valley below. Then we watched our dirt settle in its jar in LAYERS. It doesn't look very layerish in the photo, so you'll have to take my word for it. Sam lay on the ground with the camera and pretended to be a fossil, and commentated what the archaeologists of the future would have to say upon digging him up in the valley. (apparently archaeologists of the future speak like soccer commentators!) What would they make of the camera? Would they figure out that there had been a flood?

For further dirt absorption, Max threw pots on the wheel, and we made a volcano on the beach with Uncle Tim. It was awesome! 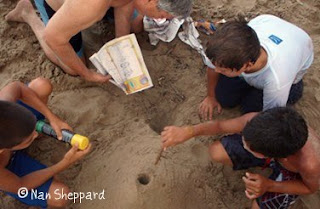 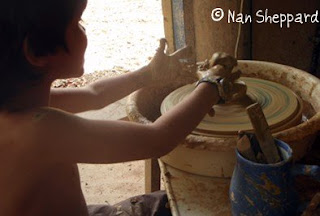 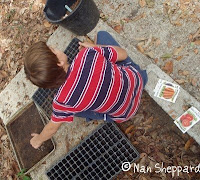 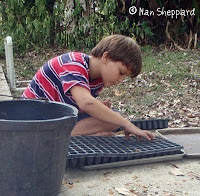 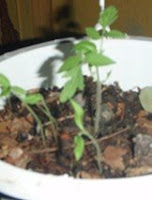 And we have been gardening with huge and exciting success! Sam is the main gardening enthusiast.

We have planted many types of tomatoes and other salady things, peppers galore, and sundry vegetables. They are growing! All we have to worry about now is the chickens, who are standing by with feigned innocence, waiting for the day the seedlings are planted in the ground. They are going to scratch them up if they can.

Computer skillz are being honed: Typing, photo retouching, Internet searches, music and iPod and MP4 management, and even *gasp!* games. We have a chart on the fridge, where I add and subtract game minutes from the boys according to my evil whim. Sam sighed "Oh what a mess this bathroom is. I'll clean it. Hmmm, hmmm, hmmm." And when he had cleaned it he went and did a little dance next to the computer games chart. He cracks me up... But of course, I added games time! If the boys are trying my patience, all I have to do is pick up a pen, head to the fridge chart, and raise my eyebrows. They instantly settle down and get back to work. It's eyebrow abuse. Sean downloaded a Flight Simulator Program this morning and walked the boys through it, so they are begging me to get off the computer now. 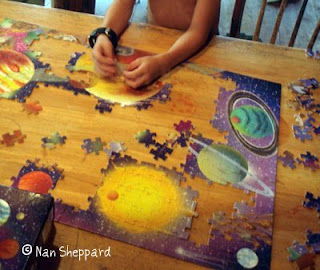 We have plenty of time for building puzzles, playing board games, doing sudoku, and painting. We will do more painting soon, as I AM in fact an art teacher and it would be weird if I didn't focus on what I'm good at! I would like to cover illustration, as we have some future scientists who will need to be able to draw a proper diagram. We will also do some watercolour painting. We need to clear the decks for that.

Oh, and lying around under tables pretending to be a cat. That's educational too. They are, after all, superior beings and one must be able to emulate that. 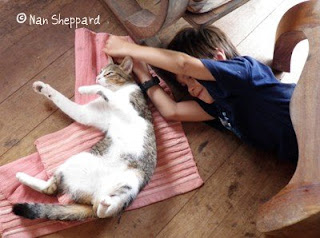 Unknown said…
As the father of three boys myself, may i say that yours are absolutely, positively, wonderful young men. And I am SO pleased to know them.
08/06/2009, 19:58

Life As I Know It said…
Looks as if they are learning a lot more than they would be sitting in a classroom.
My 7 year old has really taken off with reading this year. I love it...he stays up at night with his reading light on in bed devouring books!
08/06/2009, 22:16

Islandgirl said…
That photo of Max and Lulu is priceless! Just love it!
Where can I send in my nominee for Amazing Mom of the Year who makes all of us other mommies look baaaaaaaad?
09/06/2009, 03:47

Anonymous said…
Archaeologists sound like soccer commentators--too funny!
I hope your sons know how lucky they are!
09/06/2009, 19:23