The Weekend In Brief... 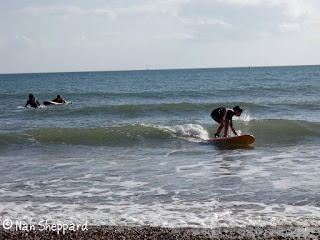 ...And in bullets, because we've been having too much fun around here to think about writing.
*The sun shone on Saturday! We went over to Boscombe, the neighbouring town, and checked out The New Artificial Surf Reef there. There were no waves, so we didn't really get to see the reef in action, but that didn't stop the boys from buying summer wetsuits (Clearance! On Sale!) and renting a board. The board was a really dreadful foam thing, but Chas still ripped the ripples, as you can see!
* Max managed to get Sam to pull him out kneeling on the board, and he surfed all the way in, standing up, and DID NOT GET WET above the knees. The second wave, he fell into the freezing sea and that was it for him. He ran onto the sand and demanded warm hot-dogs and never went back in.
*There's a surf cam on the pier, so you can check the surf and weather online before leaving home...
* There's also a BMX bike park nearby. It's on the way to Chas' school, and he rides to school, so he's been dying to check it out PROPERLY. This morning, Chas and Sam had an early large breakfast (no sleeping in for me, alas) and took off to be first on the ramps. They had such a blast, only came home when they were hungry, and then dragged their Dad back there this afternoon. They are stiff, sore and exhausted, and plan on meeting there tomorrow after school.
* It's a good thing they are often hungry, or I may never see them again. The bike park is about halfway to the surf reef, both easy riding distance.
* Learn to love English Rain: Take up Gardening!! Yes, I finally understand that serene look on the faces of English Gardeners. While the rest of the nation is muttering about the rain, Gardeners are thinking how good it is for their bulbs' root structures, and how nice it will all look in the spring. I have been poring over Gardening Magazines, and have planted wallflowers, tulips and crocuses. Next: Daffodils, if I can get some! I have no idea whether they will actually grow, as I had my kids AND the neighbours' kids, that's six all together, "helping" with the planting, and we all got a certain amount of dirt in our hair. You are supposed to plant everything a specific depth below the earth, apparently, but no measuring happened. Today, when no-one was looking, I went and heaped some more dirt on my bulbs so that they will sleep warm and cozy until March. Sleep well my little bulbies!
* My uncle Pat called to say that he may pop in this week, and I asked him if he could please bring me some worms, as his worms are so wonderful, and he said that he certainly could. Only a fellow gardener would appreciate this request. I only hope they don't escape in his car on the M25.
* Some previous tenants left a compost bin behind, and it's a Thing Of Beauty and a Joy Forever.
* The worms are going to love it!
* Whenever it rains, I think "YAY! My bulbs will be so happy!" But I say nothing, for fear of offending my surfers.
* Chas was born here, and one serious national newspaper headline that week cried, "Wettest Drought In History!" I kid you not. I kept the newspaper article, of course, and I find that it defines Chas. He has a particular English sense of humour, and WOULD be born during the Wettest Drought Ever. My boys, they defy the status quo. The sun will probably shine all through October, just for them.
Posted by Nan Sheppard at 21:06

Of course, I know you from Trinidad - so it seems strange to me that you're now in England. But you were born there - for you this is going home. I'm going to have to re-adjust my thinking.

I'm glad your boys are adjusting so well. It's amazing, isn't it - how resilient kids are?

How about a spot of fun for you and the boys:
http://www.youtube.com/user/permascience#p/u/50/scUTrypzyY0

There's lots of eco-friendly stuff on this site, just do a little digging :)

How fun!! Everyday is an adventure for you guys!! I love it!!

sigh...your comment about the worms reminds me of the hours we spent digging for them in your garden in Chicklands to feed our 5 hungry manicou. sob sniff sniffle. Not letting the kids read your blog...they may all want to move away too!!

ps. please try to have a more miserable time..or at least make it seem so so your Trini freinds can go 'HAH!! We told them they would hate it!!!!" because we miss you so. (Of course you know me well enough to know I am joking...sorta~~!)

Awww, don't worry my friend! Eventually it will start to rain in that special English way, that gets up your umbrella and into your armpits... and THEN I'll be calling you intears to say "I waaaant to come HOOO-OOO-OOOME!"

When that happens, I know you'll talk me off my ledge.

Hahah by then you'll be back home and I will have bawling baby and sleepless nights and YOU'll be talking ME off MY ledge!! :-) Will try to meet you for tea tomorrow around lunchtimish Trini time hopefully.