We Need Several Square Meals A Day, And What Shape Is A Chocolate Bar? SQUARE!

February 28, 2010
Coincidence? I think not. Chocolate, as we now know (and as the ancient Mayans knew, moments before they all achieved Nirvana), is a superfood. It contains theobromine, great for stubborn chesty coughs (my cough is all better, thanks to the increased chocolate). Dark Chocolate contributes to long life, is packed with antioxidants, lowers blood pressure and cholesterol, contains the antidepressant serotonin: just know, faithful readers, that
CHOCOLATE IS GOOD FOR YOU!

Anyone who says things like "Two ounces chocolate converts to five ounces on hips" is just a sad person, bent on spreading distress. 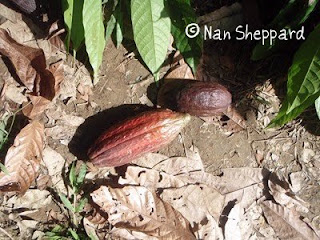 Unfortunately, all chocolate seems to come from Belgium, or Switzerland, or other non-cocoa-growing countries.

There are political reasons for this: Importing countries impose much higher tariffs on processed cocoa and finished chocolates (than on cocoa beans). For example, the European Union charges a 7.7% tariff on cocoa powder imports and 15% on chocolates containing cocoa butter, but exempts raw cocoa beans. Similarly, Japan and the United States have no ad valorem duty on unprocessed cocoa beans but charge significant cocoa chocolate import tariffs. So, with the taxes, there is little profit and much risk in turning your untaxable cocoa beans into taxable quality chocolate. Communities like Brasso Seco who have the cocoa and the industrious people who can make great chocolate to sell to the rest of us will remain entirely agricultural because the chocolate tax would price their product right out of the market.

Nestlé has proudly announced its Cocoa Plan, providing cocoa farmers in Africa with 12 million "More Productive Cocoa Trees". What a great idea! This will keep the farmers busy, producing cocoa at an extremely low cost for an extremely rich and powerful company. The fact that child labour and slave labour are suspected in cocoa growing, particularly in the Ivory Coast areas in Nestlé's scheme, doesn't seem to be an issue to Nestlé. In fact, I find that their Cocoa Plan Website makes the shabby poverty of their growers look rather cute and photogenic. Sorry, Nestlé, I wouldn't want to work on one of your farms. And thanks to your new "Fair Trade" label, millions will be fooled, and I have lost any respect I had for Fair Trade. There is no way the chocolate trade could be fair, unless the taxes were the same for processed and raw product. I cite Nestle as an example, but all of the large chocolate companies pay minimum tax and a tiny wage to cocoa growers, while shipping the chocolate back to the third world in enormous quantities.

Gandhi would have a field day with this.

So it looks like there will be little eatable chocolate coming out of the Ivory Coast, or South America, or India, or Trinidad in the future. If I were a braver woman, I'd boycott Big-Business chocolate. Maybe I could boycott except in emergencies? An internet search has produced several nice-sounding smaller chocolate companies like El Rey in Venezuela, but as I haven't tasted their chocolate I am unable to recommend that we all order online from there. What I NEED, is free samples. Mmmmmmmm.....

Now that I've written this, I'm all depressed about the politics of chocolate. Fortunately, I can hear a bar of  non- Big Business 70% calling my name from the kitchen. It contains 'Trinitario' chocolate, and I would like to fool myself that someone in Trinidad might have been paid something at some point in the manufacture of this bar.

aclare said…
Green and Blacks, before it became owned by Cadburys, before they became owned by Kraft (Yikes!), used to put something back into the South American farms that provided their cocoa. And since the chocolate has remained unchanged in flavour and price, I like to think so has the process. Although I guess the taxes would explain why it is quite pricey compared to other chocolate. We all know though that "organic' bit is a sales tactic and con, as the trees can't be sprayed, therefore making it organic. Also it would make sense why there is such a little amount of cocoa and cocoa butter in most cheap chocolates. Rendering them more like a sweet milky snack rather than actual "chocolate".

You forgot to put in your report that in order for you to get any benefit at all you have to have about 70% to 80% cocoa in your chocolate to receive any benefits. It is also good for warding off certain types of cancers.

It's no wonder the Mayans used it for currency and valued it more than gold!!

And Nestle are evil and I wouldn't let your opinion of Fairtrade be tarnished by them. The other stuff is very good. Nestle now make After Eight Mints and they have never been the same since. Too sweet and not enough chocolate.

MS said…
i bought a couple bags of Cadbury in London airport... my step kids all but cleaned it out. Zara is also a fan!

Anonymous said…
I am trying so hard to go full fair trade with my chocolate. Sadly, this usually means going without. Why does crap food get the tax breaks?
01/03/2010, 17:01