When we left Trinidad, we gave away A LOT of STUFF! Thousands of books. Ornaments. Kitchen things. Electronics. Furniture. Appliances.

And the dress-up bin.

Which is the ONLY thing we've thought "Oh no, if only we had kept our..." Which is strange. I handed it over with a sense of relief, that heap of masks, feathers, beads, capes, stripes, wigs, ties, hats. I reasoned that the boys had grown out of most of the costumes: frog costumes, Darth Vader, waistcoats, too small now. And now, we're rebuilding our dress-up stash, slowly but surely. Max has needed to be several characters in school plays, so I've been sewing. When we go to ruined castles they HAVE to spend their allowance on wooden swords and helmets. If I see a length of gold braid looking for a good home, in it goes. Bits of fabric? Always good. The kids, including everyone in the neighbourhood and the older kids, can often be seen swordfighting in full armour, or draped in Death Black.

So now, a year on, we've got dress up clothes again. So much so that a friend called this week and said "Help! Need Roman Gladiator Costume by Tomorrow!" and we had everything her son needed,including a fetching piece of red and gold fabric, perfect for gladiatorial draping AND some chain mail, I kid you not. This friend has lived here for ever, and we've been here one year, but we've got the comprehensive dress-up selection. 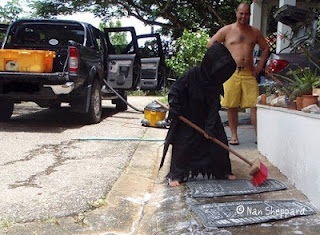 My kids would rather be wearing a metallic wig, or a lot of fake blood with half a sword in their chest. While they wash the dishes.

I thought it was something you'd grow out of, but I guess not.

What did I expect, with parents like theirs?
Posted by Nan Sheppard at 22:20

It's great fun at any age. And recreating it is the answer to whether they outgrew it- guess not!

I love that picture. It's absolutely amazing. What a great way to grow up - with such verve and imagination.

I like the fact that Death washes his own car. He seems much more human now. Although, I have to say it, Terry Prachet has made Death one of my favourite characters!

NOT. I just helped my 17 yo dress up as a pirate for a Ren Fest.

Lol! Great photo. I love the expression on Sean's face too. Classic!

That's an old pic, of course...I need to keep the camera nearby and take some more!

Aw, this is great. I LOVE my kids dressing up--how cool that they still can.

Just remember thar my three boys get what they outgrow cause my only talent is having a talented best friend!