An Afternoon With Mary Shelley 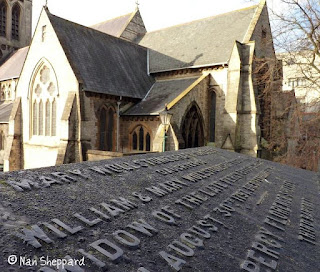 Sean and I spent most of yesterday wandering around Bournemouth, taking pictures of EVERYTHING with the Amazing New Camera!!!!!!!! We were lucky: the weather was nice. We ducked into St. Peter's Churchyard, where the boys and I had been to see the Shelleys' tomb, spookily surrounded by gnarled trees and overlooking the church. Apparently, Mary Shelley was originally buried in London, and was moved here. Sean and I met the lady in charge of the five-and-a-half acre grounds, Brenda, who was tidying around the plants and picking up trash. She told us that Percy Shelley was drowned in Italy, and when he was cremated his friend noticed that his heart did not burn. He rescued the heart from the flames, and sent it to Mary who kept it, allegedly, in her desk. Percy's heart was found there after her death, wrapped in a copy of 'Adonais', Percy Shelley's elegy to Keats.

"I weep for Adonais-he is dead!
O, weep for Adonais! though our tears
Thaw not the frost which binds so dear a head!
And thou, sad Hour, selected from all years
To mourn our loss, rouse thy obscure compeers,
And teach them thine own sorrow, say: "With me
Died Adonais; till the Future dares
Forget the Past, his fate and fame shall be
An echo and a light unto eternity!"

(from 'Adonais' by Percy Shelley... doesn't that make you cry?) 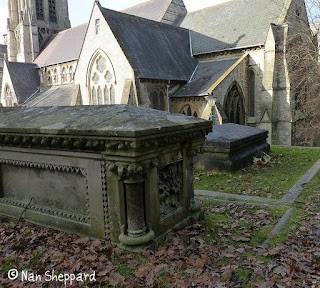 In this shot, you can see that someone has left flowers beside the Shelley tomb. I think I will take some next time I go. 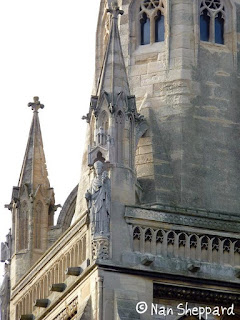 I have a lot to learn with my new camera. I haven't thought about f-stop and aperture since the days before digital, when mum and dad had an Olympus OM2. The Lumix FZ35

works fine as a point-and-shoot (Most of our photos yesterday were taken in either 'Intelligent Auto' Mode, where settings are chosen automatically by the camera, or 'Program AE' Mode, where you can fiddle with exposure and blur your background and play without having too much of a disaster. In both modes, the camera was fast, focus was fast and the images are fine (I have reduced the pixels here). The Zoom is really good and fast too. It would be a waste to use it simply for point-and-shoot though, seeing all of the other fun things that can go on! I'm studying the manual (220 pages, AAARGH!) and reading up in photography magazines, which have great articles on Digital SLR for Dummies.

This camera is terrifyingly light. A good thing if you're going to be holding your arm up while you wait for that squirrel to hop back on to the stump (he did, but refused to pose nicely). It's just strange to hold a bigger camera that doesn't weigh you down.

The other thing I have to learn is the photography software. I am notorious (with the boys) for just taking a shot, reducing the size and slapping it on this blog or printing it out. The boys take my shots, edit them, and say "Look! SEE how much better?" On second thoughts, maybe I'll just let them do it for me :) Anyway, as Christmas prezzies go, I'd say my new camera gets ten out of ten. ELEVEN out of ten!
Posted by Nan Sheppard at 15:00

I'm a HUGE Mary Shelly fan, and I'd read that about her keeping Percy's heart in a box. They were a little...erhm...INTENSE, weren't they?

ah, new cameras :-) nice.
I dropped my Nikon D80 in December, and the dial fell off (superglued back on) and I hoped all was well otherwise. But it seems the lens is slower and not quite right...I am hoping and hoping and testing that the body remains ok.
although new cameras are tempting, they are also expensive :-D

Oh no, Chennette! I am so scared of dropping this one :(

I have a few good photography books I can lend you. And the Serif software I left with you is very good with image touch ups and other more adventurous persuits! You can also get filters to make the sky more blue!! Or add it in after! There are a million things you can do! I just wish I had more time to do it!

I can lend you the books when you come this weekend... hint hint =P

So!Envious! Ducktape her to your hand! Superglue her to your fingers! Go around with bug eyes whispering "my precioussssssss"!

Nice. Very nice new camera. You can do Q&D (Quick & Dirty) edits in Picnik at www.picnik.com.

There you go talkin' dirty to my wife again!
Happy New Year Lou, hope all is well!

Have fun with your new toy. Sounds like it can open up a whole new world of possibilities. I have an iPad waiting in Florida and can hardly wait! New toys nowadays really do open new worlds and that seems thrilling to me that I'm still learnng.

I have recently been spending time with Mary Shelley's mother, the renowned feminist Mary Wollstonecraft. Fascinating, if contradictory.

I was in Oxford recently taking a picture of Shelley's tomb there, worth seeing. I love Adonis, poignant that the death of Keats brought such poetic beauty from Shelley.