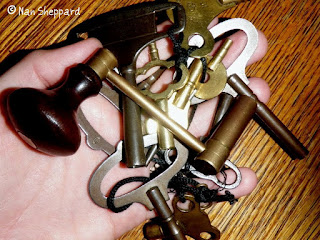 Sam came running through the house yesterday. "You HAVE to come and listen to this!!" So I did. He took me into the centre of the living room and said "Shhhhh. Be absolutely quiet."

As the silence wrapped itself around us, I heard it: the ticking of dozens of clocks, the swinging of pendulums, the tiny noises of gears changing minutes. Sweeeeet. And only Sam would ever have been quiet long enough to hear this strangely comforting sound.

Pat and my aunty Ina, who died on February 11th this year, have collected clocks for ever. Today is clock-winding day, so I picked up the "key-ring", a bunch of clock keys in different sizes, some with fancy olde handles, one with a sort of crank turner, and I went around the clocks winding them up. Chas watched in fascination as weights went up and he stopped a pendulum with the gentlest touch. We started it going again, tick, tick, tick. I love these old clocks. Every hour a whole bunch of them start to ding and dong, or chime, or even cuckoo! The cuckoo clock is in for repairs this week, and I can't say I miss it dreadfully... I prefer chimes to CUCKOO! CUCKOO! But the cuckoo was Ina's favorite I think, and that makes it special.

The house is so strange without Ina here. I have spent plenty of time here over the years, but seldom without the Ina prescence, cooking mountains of food for hordes of hungry people and giving good advice. The house is quiet these days.

Except for the clocks.
Posted by Nan Sheppard at 14:49

Email ThisBlogThis!Share to TwitterShare to FacebookShare to Pinterest
Labels: family

I managed to get my mits on one of those clocks. It's on my mantle piece now and everytime I wind it I think of Ina. I know she liked this one too. When she first got it she showed it to me with the pride of recieving a new family member.

And I too have sat in the living room completely silent and heard the ticking of the clocks. It is something quite extraordinary. The sound of time passing!

I have also woken up to the chiming of the clocks!! Counting the chimes trying to figure out what the time was!

RIP Ina - we miss you

love that. nice way to remember someone, no? by what they collected. snow globes for me :)

I'm an auditory person so I related to Sam's discovery. Give him a hug for me.

Thank you so much Nan. Much love to you all.