Parenting Tip of the Day: Long Distance Love and Online Gaming with Dad 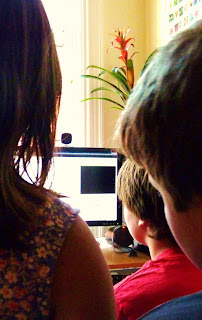 When one parent is away for long periods of time, the remaining parent can feel as as though they are ALL ALONE, the one thing that stands between the tiny terrors and total apocalypse. As the kids grow up, other factors come into play, like teen independence and boys looking around for their pack leader.

Ideally, the pack leader of a herd of boys would be Dad, who knows everything and smells right and has the proper DEEP VOICE for giving orders. With Dad away, the pack begins to compete for the position of Alpha Person, which can make things interesting.

Luckily, we have the internet! Dad can appear at the press of a button in all his deep-voiced glory and sort things out. At times, Dad can even sort out crises which Mum was completely unaware of, such as boys going online to purchase air pistols. And this is not just a random example I've made up. Within minutes, free mobile messages have passed between Mum and Dad over thousands of miles along the lines of "WHAT? He did WHAT? You mean it's not a toy??"

The problem with raising intelligent, self-confident, inventive boys who think for themselves is that they frequently come up with great ideas for, say, making a film at home. They need realistic-looking firearms for the death scene. They hack their way round the computer's parental control security, and claim that they had no intention of getting ammo or actually shooting one another in the eye, really, cuz they were only going to use the gun as a prop. And you, the mean and dictatorial parent, has ruined everything because now they will have to use a water pistol for the death scene, oh woe and lament!

To which the loving parent says, "You are so busted, Mister."

There are many ways for a long distance parent to keep in touch with boys, but the best one, particularly for Dads, must be in playing online games together. Tribal Wars and Dark Orbit  and others are great games where it helps to have a few friends in the same team. Members help one another out, chat in game time and can talk via Skype while they play. The conversation can be a little baffling to an outsider: "Oh crap, send 1400 axemen! 2-8 home base is crawling with VRU. Yeah, he's a noob."

I just asked Sam for an explanation, he spoke intelligently on the topic for some time and I understood absolutely nothing. I am asking him for a help paragraph:

Basic Idea (Dark Orbit)=
3 Companies (VRU, MMO, EIC)
They don't like each other.
The star system contains lots of different maps. 1-x is MMO territory, 2-x is EIC and 3-x is VRU. 4-x is battle maps, and 5-x is pirate maps full of NPCs (Non player Characters).
Average day for an experienced player:
Start off in 2-8 or 2-1 (home bases for EIC). Imagine at this point in time your ship has been destroyed in the lower maps, which means you are in 2-1. Travel left and down after "repping" , or to you non-believers "repairing"... then you reach the portal and press J.
Jumping through the portal brings you to map 2-2. continue down and do the same so you are in 2-4. Down and left would take you to 2-3. Once in 2-4 you fly down once more, killing anyone who attempts to intercept you on the way. THIS IS A HUNTING GROUND. Be careful and look out for red dots on the map near you, which may be cloaked enemies. If any attack you which are bigger than you, run like hell towards the nearest jump portal and press J very very fast. HOPEFULLY, you will escape. Anyway, if you aren't intercepted on the way down from the top left of 2-4, you should reach a portal to 3-3. VRU territory in there. Buy a cloaking device or just jump in. Head for the middle of the map so long as the portal isn't too heavily guarded. Then kill anyone who's there. If they're small. If the exit from 3-3's portal is too heavily guarded, then go to one of the battle maps by coming out of 3-3 and back to 2-4. Then head for the bottom middle portal. Be careful because once you jump in there's no jumping out if somebody attacks you. If you unfortunate to have campers* at your portal await A: Rescue (Unlikely as they will kill you within 5 seconds) or B: Death. If there are no portal campers, then, lucky you! Move out. You are in 4-2, EIC's battle map. Head for the portal in the middle and jump. There may be campers here as well, but less likely and if so in smaller numbers. And smaller ships. With smaller lasers. If there are, kill or die. If there aren't any, head for the top portal which will take you from a hunting ground (4-4*) to safety (2-5). Head for the top left portal which will take you to 2-6, then top right which will take you to 2-8 (Upper maps base). Hopefully you will have got away with a couple of kills.


*4-4 is the main battle map.  Sometimes a game called space ball is held here in which a ball is in the middle of the map. The battle map is crowded with players from different companies trying to shoot the ball. EIC often win this by getting the whole company to go there, wipe out all the enemies and then some shoot the ball while others guard the portals. If your team is doing the most damage to the ball then it will move towards your portal. When it reaches your portal you get a point.


Well! Thank you for that Sam, I am sure that clears everything up. Now, you can see why having a Dad who's on your team would be really helpful? Good.

My point is, when families play games together they communicate. Even if all you can get out of your teen is the occasional grunt, you can be sure he's talkative with his game buddies. And the lovely thing about communication is, it doesn't matter WHAT you talk about. In fact, chatting with your teen about what is important to them (i.e. total universe domination and the annihilation of noobs) will earn you more points than explaining why deodorant is so very important.

The internet is a strange place, peopled by weirdos, kids, mums and dads, responsible citizens, psychotic maniacs and nerds. I'm glad to know that my boys' dad is out there, watching out for them as well as he can. Of course, online games are not all the same. Some are definitely 'Adult' in an unsuitable way. And some can be too time-consuming for anyone who has other things to do. Keep looking over your child's shoulder, and keep listening.
boys parenting

Kath McGurl said…
Ha - my sons were into Tribal Wars for a seriously long time but now it seems to be all Minecraft.

Anonymous said…
Speaking about great ideas, here's another super-cool from TED I thought the boys might enjoy:

Unknown said…
"The internet is a strange place, peopled by weirdos, kids, mums and dads, responsible citizens, psychotic maniacs and nerds." Hmmm. Sounds just like "Real Life", to me. Well. Real Life DOES have Politicians, so there IS that. Bummer.
12/09/2011, 19:43

Anonymous said…
I did not read your son's description of his game because I do not listen to my son's descriptions of their games as it is! My eyes just glaze over. I know I should but we do talk about lots of other things, honest... ;)
12/09/2011, 21:58