May 10, 2012
My sister Ailis was at the doctor's office recently, and got chatting with another mum there. The other mum was consumed with guilt because she had given her baby a taste of chocolate biscuit, and felt so much better when Ailis said that Kate went wild for Jelly! There's so much guilt around motherhood, and so many rules, and everyone has an opinion. I'm here to say this:

My friend Miira's beautiful two-year-old lives almost entirely on breastmilk.
My middle child ate anything he could reach, as soon as he could reach.
My last child spent several years living almost entirely on air, supplemented with the occasional nut, and is now having a growth spurt and eating five large meals a day.
Some babies are very interested in food.
Some are not.
Some mums get a huge kick out of feeding their babies.
Some do not.

My only warning is that babies need MILK, and lots of it. Have you noticed the food bits in your baby's nappy, if they are eating solids? That's because although a six-month-old baby can enjoy food, their body is not able to process it properly. The foodie goodness comes right out the other end, along with any 'added vitamins and minerals'. So ensure that your baby is still getting almost all of their calories from breastmilk or a sensible substitute.

SO. Here is Ailis' Fabulous Fish Pie recipe. Apparently, Kate (8 months old) thought this was the best thing after Jelly... 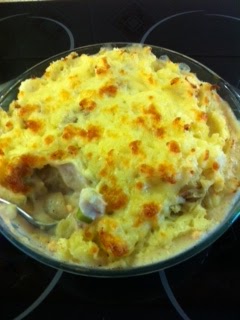 To buy:
Salmon and cod - I got mine from the fish monger and asked him how much I needed. It would be easier if you get it without any skin on.
Flour, milk, butter (for the white sauce and extra milk and butter for the mash potato)
Cheddar cheese
Potatoes, leeks and an onion.
Black pepper, bay leaves, freshly grated nutmeg and allspice.


Method:
Like most people who have been cooking for a while I don't measure anything. I just do it by sight and taste so apologies for the lack of quantities. It also depends on how big you want it to be and how you want it to taste!
To start I poach the fish in just enough milk to cover it and add the black pepper, nutmeg, bay leaves and allspice to taste for 5mins. Remove the fish and retain the milk for the sauce.


Saute the leeks and onion in butter until soft. Add flour (about a tablespoon) to make a roux. And then slowly add the milk from the poached fish and stir until it coats the back of the spoon. Should be a consistency like custard. You can take the leeks and onions out, make the white sauce and then add them back in after. But I like the flavour it generates by leaving them in. Remove the bay leaves.


Cook the potatoes until tender and then mash with the butter and milk. Add a little of the nutmeg to it.


Flake the cooked fish and add to the white sauce. Mix well and place into a over proof dish.


Place the potatoes on top of the fish mixture and grate some of the cheese on top.


Place in the preheated oven for 12 mins. Or until golden and bubbling. I whizzed up some of the fish mixture so that Kate could benefit from the leeks and onions (as they were too big for her to gum!). I have found that puréed potato goes gloppy so I just keep that mashed. I'm also a lazy cook so I don't peel my potatoes - I use the Maris Piper variety where the skins disintegrate anyway so it isn't a problem. 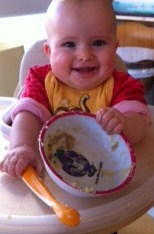 My mum used to use Idaho potatoes and they seemed to have much the same effect. And a lot of goodness is in the skins anyway so that's my excuse! So that's it. Hope you enjoy it. We all certainly did!

aclare said…
My lovely Health Visitor says that it is 1 pint of milk a day. BUT that includes all dairy products - yogurt, cheese, etc. Until a year old. But Kate loves all those things so I don't worry. But if you were concerned then there is some assurance.
12/05/2012, 15:16

Anonymous said…
I wuv those cheeks!
Always wondered how you get the fish thing going on in there. Definitely keeping this recipe.
Thanks Ailis

p.s. I never noticed that KLIM was milk spelt backwards until my husband told me. (Subliminal advertising or just laziness?) He grew up on the stuff and I guess saw it often enough to figure it out. I was like Duh!!! That totally went over my head for years!
p.s.s. I never partook of the stuff, KLIM that is. 100% fresh cow's milk for me.
p.s.s.s. Not that I'm calling my mama a cow, because I'm not 'cause that would be like so disrespectful.
p.s.s.s.s. I drank the bovine substitute after my brother was born and took the good stuff away.
p.s.s.s.s.s. My first kid (not that I am calling my child a goat either) devoured mummy milk like there was no tomorrow.
p.s.s.s.s.s.s. The second mutinous one was extremely scornful and squirreled the soy milk into the grocery cart as soon as she could hold up her diapers long enough to reach for the shelf. Traitor.
p.s.s.s.s.s.s. The point I was trying to make is to each his own. We all turned out healthy enough.
14/05/2012, 18:17