This is Why Packing to Move House Takes So Long 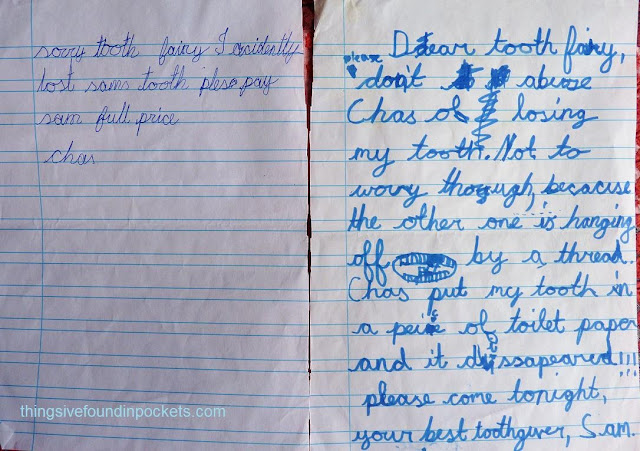 I keep coming across gems like this one! Chas aged 8, Sam 7.

Sam and the Tooth Fairy have a long and colourful relationship, and I wish I had kept all of the letters back and forth. As far as I remember, this was Sam's first lost tooth, and Chas was helping him to organize it properly, being way more experienced in these matters. The Tooth Fairy paid in full on this occasion.

I have to say, the tooth fairy wrote some great letters back herself. But she was often a day late, or broke. And she once charged Sam 90% of the fee because his tooth had fallen off a jetty while we were on holiday  and been swallowed (allegedly) by a very grouchy (and stingy) moray eel and had to be forcibly recovered. The Tooth Fairy explained this in a rather wet letter and Sam appealed for justice, but to no avail.

Anyone who tells their kids that Santa and the Tooth Fairy et al are not real, are missing out on some serious fun.

trash said…
One night the Tooth Fairy actually remembered to turn up only for no tooth to be visible. I was informed next morning that the Tooth Fairy is rubbish at finding things, turns out the Girlchild had hidden it inside a chest in the kitchen of her dolls' house!
28/07/2013, 10:33

Nan Sheppard said…
Haha, the Tooth Fairy should have known that, being magic and all! But she gets confused sometimes when business is busy...
28/07/2013, 10:55