There were so many things that she wanted to do, that whenever she thought it was time to begin, she couldn't because of the state she was in...

It's been a week like that, I'm afraid. Even the poor cat has been ignored. I have been hopping from one project to another, decluttering, studying, dancing, jogging, painting and repairing my home, and loving every bit of it, but the really important things that have deadlines are starting to loom out of the mist and cackle nastily. Paperwork and such.

So I'll just leave you with a few thoughts, that do tie together:


I am all for capitalism. I like that you can sell just about any thing, any idea, any clever gadget. But maybe some checks and balances need to be put in place, like the laws that govern infant formula marketing. Of course formula companies ignore these laws whenever they can, giving free supplies to new mothers in the third world so that their breastmilk will dry up and they will have to continue buying the product and so on. But at least the laws exist there, so the 'judgy lactivist breastapo hordes' can keep bringing marketing abuses to the attention of the WHO. 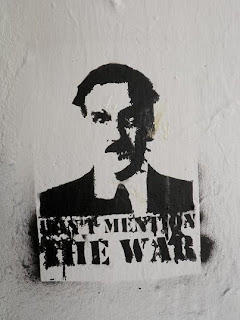 Maybe similar checks and balances need to be in place in other areas where a product kills. Arms and drug manufacturing, for example.
I haven't got the answers - but I'm seriously asking the questions. We should all be.

Anonymous said…
Sing it, sister. It makes me so angry to see the warmongers get the money they want every budget round, but when it's time to fund schools or environmental protection or infrastructure projects...
That quote about the money spent just got my blood BOILING.
16/05/2015, 02:30

Grandmother Mary said…
Back in the 70's I saw the same thing in poor infants in Jamaica for the same reasons before the country-wide "breast is best" campaign. The idea of corporate profits coming before their lives is obscene. This is a powerful combination of info & videos. We've lots to do...
19/05/2015, 14:04