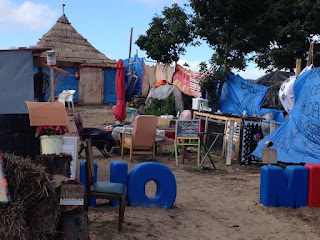 Mrs. Sheppard, where I come from, there is a saying: 'The patient man will be patient until he dies.'

- Anon, pharmacist from Afghanistan living in the Jungle in 2015


When I went to the Calais 'Migrant Jungle' in 2015, it affected me enormously. I meant to really write something. But other things kept happening, internationally, politically, (gosh, a lot has happened in the world since August 2015!) and I wished that I could come up with some 200-word SOLUTION that people would listen to, but all that happened was that I read more and talked to more people, and everything I would share would take 100 years of talking and writing. So this will be more of a short and useless ramble.

The Calais Migrant Jungle was similar to many slums - similar to Trinidad's slums in some of its architecture, economy and vibe, so it felt a bit like home for me. The people there divided themselves into loose neighbourhoods by religion and language, and many spoke some French with a smattering of English. We were handing out three vehicle loads of sleeping bags, tents, split peas, rice, seasoning and other goodies, knowing full well that it would have been better to have given them to an agency who could distribute them as an when needed rather than just handing them out to the strongest, pushiest and least needy. The economy of a slum is based on power, and the trickle down effect does not work there - similar to the way in which giving tax breaks to large companies does not help the neediest in society but only enriches the rich. The power in the Jungle, as in many slums, is held by strong men. But our planned contact in Calais had fallen through, and handing out goodies seemed to be less tragic than returning to the UK with all of that good stuff. I'm still not sure if it was! But since I was personally there for fairly selfish academic reasons, I thought I could at least interview a few people in exchange for sleeping bags. We hooked up with some young ladies from Secours Catholique who were valuable allies, they had experience and spoke the language. 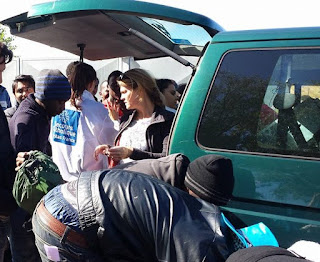 My Afghan friend was well-spoken and earnest, and educated enough to understand that I was not there to help him. We surveyed the scene and talked about travel, passports (I hid mine upon my person like a true Trini at Pan Finals, but I needn't have worried, no-one tried to pick my pocket), education, politics... He wanted me to understand, looking at the dozens of Afghan and Somalian men searching for shoes in their size and belts and decent shirts, that every person there was going to keep moving until they found a home. Nothing we could do would stop them. He wanted a backpack, because if you have a backpack you can keep your things with you - money, treasures... passport. I hoped we would be able to give him the one we had, but it was snatched away and disappeared. I thanked him for his patience.

We had a scary moment. At one stage we ran out of the best goodies and mob mentality took over. The crush of angry men threatened to destroy vehicles or worse. Why didn't we have more? They had waited in line nicely (not really), for nothing? What about in the front of the van? What was that stuff? Whose bag was that? I pushed into the mob and grabbed one man by the shoulders, made him look down at me, and said "Can you help me? Ask your friends to be peaceful. Ask your friends to let us look and see if we have anything else. We need your help." The light of the mob faded from him and he was a human again. Next man, next plea. Next man, next plea. Look at me, I'm small, I'm a woman, I need your help and I won't be giving you anything in return. Gradually we had peace and humans again. But we were all humans to begin with. There were no troublemakers there, wanting to punish or make war. It was a risky tactic for me to assume that every man there was going to cool down and walk away empty handed. It was sheer luck in action. There were no police or any sort of security nearby and the UK and French border controls had both said, tight-lipped, that we were not at all advised to go and did so at our own risk.

An hour later, we were kicking a football around in the dirt with the same men. Somalia VS Dorset! 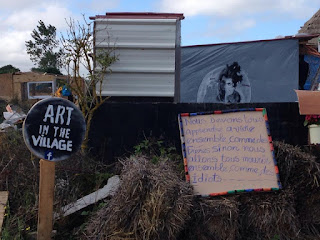 A week or so after we returned to the UK, the camp was bulldozed. Our gifts became landfill, along with the treasures, papers and passports of anyone who wasn't quick enough to save them. I've thought of them often since then: the chef who skipped off merrily to a central cooking area with lentils, curry powder and onions; the Somali footballers, with their deflated and worn ball; the drummers; the artists; the farmers; the engineers and other professionals who, if and when they arrive at their final destination, will find their qualifications invalid and have to do janitorial work or whatever they can to get by.

The Calais Jungle residents have been moved on, so who knows where they might be now. Whenever the weather is cold, I think of them, and all those landfill sleeping bags. Thanks to my trip to Calais I have ideas, which drive some of my research. When I started my degree, I thought finally I would have some answers. All I have, it seems, are more questions.

There are so many desperate people in the world. Further marginalizing them will only worsen things. :( And I can relate to reading too much and wanting to write up a brilliant solution. All I ever do is spotlight problems, it seems.

I wish there were an easy solution, but it requires a lot more tolerance and love in this world

I read of that camp and it's so sad how the people were shoved out and told to move on...where? Their plight moves me. I love that you were able to be a human touch and offer help and hope. From this distance all I feel able to do is write a check.

I don't feel like I was helpful to them - but the experience will stick with me through the rest of my degree and whatever I do in my work life, so it will help others. Hopefully!