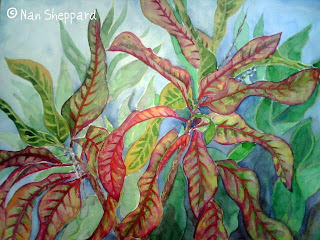 So all is well, the babies are eating hungrily and seem to prefer soy, Sharon and I are creatively exhausted, the boys are having a ball at sailing camp. Sharon and I are heading to my brother's house this morning to help with the continued unpacking project there. Hopefully we will get to babysit Alex too!

GirlBlue said…
Love the painting but mwahahahaha ewwwwwwww hehehe. See the one I named is a Stinky after all hehe
07/08/2008, 14:47

Anonymous said…
eewh! Manicou poop in your bra! You are a better person that I am Nan!