My Kids are Perfect... Naturally, Because I'm An Expert

May 05, 2010
We had a long train journey this weekend. We're good at long journeys! Us usually, we read, play, colour, chat about the scenery. And people say nice things about what NICE kids those are.

So we set off this weekend, picnic in hand. Sean and I had been out the night before and had a few glasses of wine with friends and stayed up too late, and the kids had convinced the babysitter to let them stay up too late, too. Max woke up on the wrong -WRONG - side of the bed. Nobody was in a nice mood. Max wanted to wear his impractical shoes and had to be convinced otherwise. We set off later than we expected, nearly missed our train and had to get all stressed out.

A nice family with nice-looking kids were near to us on the train, and usually we would have pooled resources with them and chatted, but as the journey continued they began to sort of huddle together, you know that way you do, as the kids snapped at one another and I muttered "Agh, cutitout" from behind my dark glasses. Max was teased for being grouchy, and kicked his dad in the shin.

"See Max? Aren't you glad you wore those practical boots? MUCH better for kicking Dad." Max actually burst out laughing and kicked Sean HARDER, so Sean held him down and took a picture of the inside of his nose. 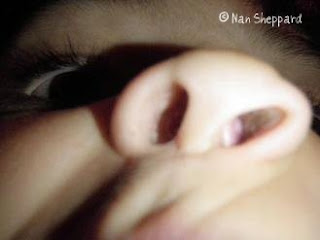 "Congratulations!!! You are our cover model for this month's 'Nostrils Monthly'!!" and Max got cross again and sulked.

The nice looking family got off at the next stop, or maybe just changed coaches. I wouldn't blame them. They were sort of holding hands and really appreciating one another. You know the way you do!
parenting

The Mother said…
My family of four hyperactive boys has terrorized the natives hundreds of times. We got used to the stares, the derisive comments, and the LOUD reminders to THEIR children that that is simply not the way WE behave.
05/05/2010, 18:11

Unknown said…
Ah yes. Been there. Done that. The thing is, my boys, alert, intelligent and cosmopolitan, as they were and are, KNEW what they were doing, KNEW they were terrorizing every mother, father and whimpering child within earshot, and they did it anyway. On purpose. Little farts would laugh and giggle all the way home after an especially successful foray into ruining my reputation as a parent.

Motherknowsbest said…
Always let your third child wear those impractical shoes and pack the practical ones yourself. Third children are like that. Shoes are important - those boots are made for walking and the red shoes for example. A. liked to buy the ones with sequins from the Indian bazaar even though they were 4 sizes larger than she took. I felt she was expressing her personality in weird and wonderful ways. Now that I look back on my life I can see that I was always a perfect mother and this is why I am doling out this dubious advice to you my dear.
05/05/2010, 22:03

Nan Sheppard said…
Ahh yes, we set a great example, we did!

Motherknowsbest, normally I EMBRACE impractical shoes, but for rushing through the grotty underground of London, down precarious escalators and alongside speeding trains? Not so much! It was definitely a day for anti-parenting. Fortunately, we all love each other again now!
05/05/2010, 23:00