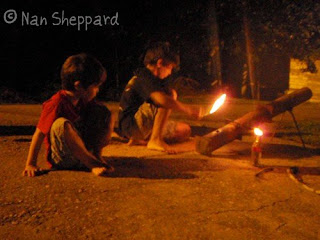 We've been having a long weekend over here! (What, ANOTHER long weekend, Trini?) Today is Divali (or Diwali, as it is spelt elsewhere), the Hindu festival of lights. The boys have been in the village at night busting bamboo cannons. Actually, their cannon of choice is made from a piece of 5-inch metal pipe, which is not traditional. It belongs to some boys up the road and fires with such a noise as to frighten Ravana and his entire army and send them home quivering in their boots.

"Bussin' Bamboo" involves plenty of fire, pitch oil and singed hair. in years gone by, small boys who haven't learned better yet go to school the day after Divali with eyebrows missing and fringes frizzled from back-firing cannons. Fortunately, my boys seem unscathed THIS year. So far. Knock on wood.

Tonight, the Hindu half of the village will light Deyas everywhere and feed anyone who comes within shouting distance. The food will be delicious, completely vegetarian, and curried. If you don't hear from me tomorrow, I am digesting!

I have been cleaning around the house, because on Divali night Mother Lakshmi comes to bring blessings, prosperity and so on. The whole village has been full of pressure washers and newly-painted walls all weekend.

And then on Sunday evening I got a phone call to say "Whatcha doing tomorrow?" and I said "I dunno, come over! Bring something that goes with macaroni pie!" So yesterday (Monday) we had fourteen children, coffee, beers, (cuz nobody remembered wine!) baked fish stuffed with cajun shrimp, baked chicken, stir-fried chicken, salad, I don't know how many grownups because we never counted their heads (what? they can look after themselves!), cassava thingy, callalloo, rice, and I am sure I saw raviolis at one point. Oh, and pecans, roasted peanuts in their skins, lime juice, watermelon, home-made yogurt....

I have to make macaroni more often! We agreed that we will have to do this again soon, because of the wine thing. Practice makes perfect!
boys holidays Trinidad

Anonymous said…
You know how to entertain, Lady!
My son was peeking over my shoulder and really wants to do the cannon thing now. It's probably a good thing we don't have that celebration here, 4th of July is scary enough!
28/10/2008, 15:45

Anonymous said…
How you make macaroni pie? Please advise. You guys have so much fun and such cool times. Can we be friends in real life, not just virtually? I hardly ever forget the wine :)
28/10/2008, 23:08