August 28, 2011
It's the last week of Holidays here, the week of trying on new school trousers and trying to get bedtime back to something reasonable and HAIRCUTS. Boy, it's been busy! A lot of sandwiches have been eaten in olde ye steam trains, under trees, and atop windswept hills. Hordes of friends and cousins have come to stay. The weather has been interesting, with sunny days and then A FLOOD! and then some more sun and rain, very tropical. The BIG FLOOD ('it rained and it rained, Piglet had never seen so much rain...' we nearly had to be rescued on a honey jar, 'The Brain Of Pooh', or was that the umbrella?) completely washed out the first day of Bournemouth's four-day Air Show and Chas's YouTube footage was aired on national news. We made cookies instead with hordes of visitors. I let the kids eat cookie dough even though they might get salmonella poisoning, and it was yummy and they didn't.

Day TWO of the Air Show was perfect. We headed to the beach and were blown away by the awesomeness of the Red Arrows, Wing Walkers, and dozens of other sights and sounds. Later that night, we sent Max off home with a friend, and Chas and Sam and I took in the live music on the beach. A T-Rex tribute band called T-Rextacy was brilliant! The boys were blown away and would have partied all night but I made us all go home before ten. Boring Mummy!
We slept like logs, looking forward to the next day and MORE Air Show fun. But the next day, as we were getting ready to head out and watching the beginning of the show from our kitchen window, we heard that one of the Red Arrows, who had opened the show and headed back to the airport over our house, had crashed in a field. The news was not good, and it put a damper on our party spirit. We had just waved to them, as they roared by. How could any of those dancers in the sky, crash to Earth so terribly? Sadly, we learned that the pilot had died. A tribute was flown the next day, the last Air Show day for the year.


We borrowed tents and things and went camping in the New Forest with cousins who are seasoned English Campers. We had a lovely time, and I think that 'Camping', with hot showers and toilets and all, is very nice, but very different from the Camping we're used to. We'll buy some of our own stuff, and bring our Trini camping things, and do some more next Summer. The kids climbed trees, whittled a fleet of boats, and ate a LOT of beans. Next time, we must plan less beans, or have separate tents. 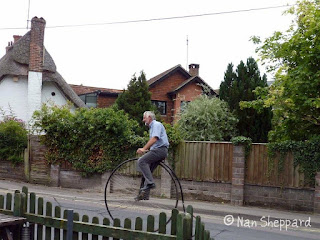 The campsite is in Brockenhurst, which is really convenient for us. We rode to our station with all our stuff, put our bikes etc on the train, and hopped back off at Brockenhurst station. The campsite is riding distance from the station if you're reasonably fit and can carry all of your tents on your backs. On the way back, we ate at a pub near the station and along came a man on a Penny Farthing Bicycle!
Much lolling under trees, reading books, riding bikes, baking and eating has happened as well. Building projects, mess, and art. I have been cooking and freezing, and poring over recipe books. Riverford has been delivering organic, seasonal veg to my doorstep and I thought it would be too much so I froze some things, but we have now eaten it all. We've been to the library and read our way through stacks of books. I've been reading to the boys, even to the big boys, who are loving it. We've been watching films: Oldies like Mary Poppins

, and newies like the Entire Lord of the Rings Extended Trilogy

. Visiting children have been encouraged to do wild things, resulting in one trip to ER and five stitches. This did not slow anyone down, though, and the brave wounded boy hobbled all over the ruins of Corfe Castle to celebrate Enid Blyton's birthday. What fun to visit Kirrin Castle with true Enid Blyton fans!

Now, I hope the sun shines all day today because I have heaps of sheets, towels and duvet covers to wash and hang out. DVD and book reviews coming soon!

What was the best part of YOUR Summer? And what is your aftermath like?
books Bournemouth family holidays luverly weather

Grandmother Mary said…
You might guess that the best part of my summer was the 3 1/2 weeks with Kelly, Carl and the kids. Great fun with a now tall Kh. and a newly ear pierced Km. We really had a ball. Your description made me realize again all the things I admire about your parenting. Well done, Nan!
28/08/2011, 17:52

rory@ajoupapottery.com said…
The BEST part of my summer was reading all the stuff and whatnot youall did!

Unknown said…
Awesome summer Nan! Makes me feel the way I felt as a kid, after a particularly amazing august holiday: invigorated enough to look forward to going back to school :)
There's a Kirrin Castle!!!!!! :)
Reading about your adventures with your kids makes me nostalgic for my childhood. It's wonderful that you've been able to share your joys with them, and instill in them the same enthusiasm for life that you enjoy :)
30/08/2011, 14:06

SOunds like you guys had lots of fun. Son, Mum and I bumped into Chas at Hatchet Pond I guess when you were camping at Brockenhurst. He was going fishing.
11/09/2011, 21:25